Brief : Create short Promo video of “A Day in the Life of Galeri” to celebrate the upcoming 10 Year Anniversary.

As this was one of the biggest project we undertook at Stiwdio Franwen, almost the whole team were involved in it’s production.

We travelled to Caernarfon to meet with Mari Emlyn, Artistic Director of Galeri to discuss her ideas for the promo and begin brainstorming the production.

Two specific shot concepts were quite clear from the outset – one was a time-lapse of early morning at Galeri to start the promo and the other was a time-lapse of the theatre filling to capacity. For the first of these shots, we asked Motion Control & Timelapse expert Matt Syddall to come in and show the crew how motion controlled time-lapse worked and try out a few shots with them. Matt was then tasked with getting up early to get the  dawn shot featured in the video before being joined by Tommy to take some general motion controlled shots around the Galeri.

After this was complete, our camera crew descended on the Galeri with tripods and Glidecams and proceeded to film everything and anyone in sight (careful to ask permission first!).

Finally the capacity theatre time-lapse was taken at the Dawns-i-Bawb showcase night – many thanks! – and Tommy was ready to start the edit.

Connor set to work on a chilled out electro-jazz track and Tommy wove it into the edit. 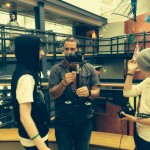 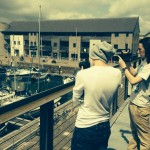 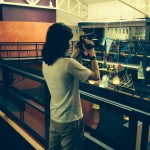