Siwan Llynor, met with Paul and the team from Stiwdio Franwen to discuss a production of “Paid Gofyn i Fi”. Siwan came with some basic ideas of what she wanted and very quickly the team cooked them up into an ambitious (in terms of deadline & skills) set of concepts. Animation 1 was to create a time machine / computer with a very old ‘steam punk’ type look that could run through a series of animations on request. For this Paul researched vintage machinery, steam punk styles and some Heath Robinson sketches. Working with both illustrator to build his elements and After Effects to composite and animate them, Paul began assembling the machine!

Part 2 was to create an animated tree growing using a white line style. Tom researched and drew up concepts for the tree in Illustrator to be animated in After Effects. 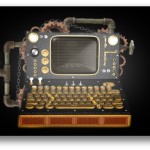 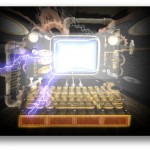 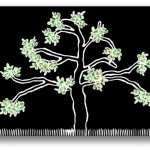