An Interactive Tour of Swn Studios!

As part of the work we under took for the newly established Swn Studio in Bont Newydd, Josh undertook the challenge of creating an interactive 3D model of the studio. The first part of the project was visiting the studio to take reference images and textures for use in the final model.

Josh immediately began work on laying out a simple box arrangement of the studio and then edited the images he’d taken to use as textures as well as searching the internet for extra textures & models to populate the space.

After the model of the studio was complete we began developing some basic coding to allow user interaction and information displays for the user. 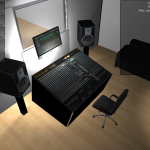 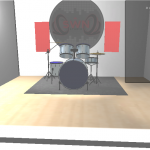